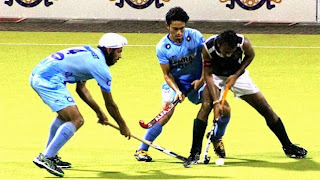 The organizers has scheduled all the India’s league games – the opening game against the Netherlands on December 6, the second game against Canada on December 7 and the concluding league fixture against Korea on December 10 – at 8 pm IST to ensure hockey lovers coming from work are in a position to watch the hosts in action.

Of course, it goes without saying that the timings of the quarterfinal, semifinal and the final stage is subject to how India fares in the league phase.

It may be worth recalling that India had won the Junior World Cup only once in the 2011 edition in Hobart, Australia, where they thumped Argentina 6-1 in the title clash under the captaincy of Gagan Ajit Singh, who happens to be a national selector now.


Sardar Singh joins national camp after stint with HC Bloemendaal
Indian senior team captain Sardar Singh has joined the men team’s camp at SAI Bhopal after a sting for famed Dutch club HC Bloemendaal. The star midfielder has been training with the national team for the past three weeks in Bhopal in preparation for the upcoming FIH Hockey World League final round to be held in New Delhi beginning January 10.
The 27-year-old midfielder last played in the 9th Asia Cup in Ipoh, Malaysia where they finished runners-up losing narrowly to Korea before going on to bag their 2014 World Cup berth taking the Oceania quota place.
HC Bloemendaal is a renown outfit in the Netherlands and many top international players like Jamie Dwyer (Australia), Christopher Zeller (Germany) and Floris Jan Bovelander (Holland) have played for them in the past.
One hopes Sardar’s stint in the Netherlands will do a world of good to Indian team’s performance in the upcoming FIH Hockey World League final round in front of the home crowd.

Indian men’s team take a break ahead of Hockey World League Final
The Indian senior men’s hockey team is taking a short break from its preparatory camp for the upcoming FIH Hockey World League final round to be held in New Delhi beginning January 10. The national team went through the paces at its camp at SAI Centre, Bhopal for three weeks and are expected to take a two-week break before they rejoin for the final phase of the camp in Bhopal from December 28 until close to the start of the FIH Hockey World League final round.
The senior team was seen watching the Indian men’s junior team humble Argentina 4-2 at the Major Dhyan Chand National Stadium in New Delhi – the likes of Sardar Singh, SV Sunil along with head Terry Walsh and High Performance Manager Roelant Oltmans were seen in the Stadium closely following the proceedings.
The senior team had finished fifth among six teams in the 3rd Asian Champions Trophy in Kakamighara, Japan where the national team comprised largely junior players in a bid to prepare them for the 10th Junior World Cup.
The 3rd Asian Champions Trophy was the senior team’s last international tournament for the year.
Earlier, they had featured in the 9th Asia Cup in Ipoh, Malaysia where they finished runners-up losing narrowly to Korea before going on to bag their 2014 World Cup berth taking the Oceania quota place.
It is pertinent to mention that India had qualified for the FIH Hockey World League final round by virtue of being hosts after failing to go beyond the semifinals in Rotterdam earlier this year.