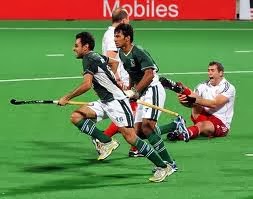 All is not well in Pakistan hockey. The national men’s hockey team failed to qualify for the World Cup for the first time ever and with the warring factions of POA keeping their egos ahead of national interest, Pakistan’s participation in 2014 Asian Games slated to be held in Korea is also in jeopardy.

There is a general air of disgust over how the national team has performed on the international stage as well as uncomfortable questions being asked about the officials of the Pakistan Hockey Federation (PHF).

A bevy of former Olympic greats staged a protest outside the Parliament in Islamabad against the inept functioning of the Pakistan Hockey Federation, calling for the sacking of the present PHF officials and demanding a probe against them.

Former greats like Samiullah, Shahnaz Sheikh, Muhammad Saqlain and Qamar Zia held placards expressing anguish over the state of hockey in the country.

Significantly, no parliamentarian showed any interest in listening to the grievances of the protesting former hockey greats.