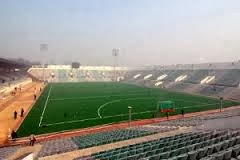 The upcoming 10th Hero Junior World Cup hockey tournament, beginning at the Major Dhyan Chand National Stadium from December 6 is expected to pull in big crowds given the fact the event is held in our own backyard.

Tickets will be priced at Rs 50 for generala admission, while hockey lovers who wish to avail an VIP seat has to shell out Rs. 1000. Each ticket entitles the spectator to watch all the matches being held on each day.

The Major Dhyan Chand National Hockey Stadium has the capacity of accommodating around 16,000 spectators.

The organizers have kept ticket prices lower in a bid to ensure maximum spectator interest for the big-ticket event.

As many as 16 teams will be slugging it out in the ten-day event, playing 44 matches at Major Dhyan Chand National Stadium.
at December 02, 2013