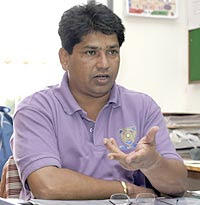 Suhrid Barua
suhridb@sakalherald.com
Ratnagiri: The outgoing Maharashtra Ranji coach Chandrakant Pandit may have worn a downcast look after State were given an innings and 129-runs shellacking by Karnataka in a Ranji Trophy game here. But he chose to look at the positives from his three-year stint with the State side.
"It’s hugely satisfying to see the youngsters emerge through the ranks. The outcome here may have been a huge disappointment, but we have a flush of talent and the need of the hour is to carry this talented bunch together and evolve as a quality side."
The former India stumper, who decided to step down as State coach during the course of the ongoing Ranji game, conceded that his side missed some experienced players, though he stopped short of criticising their non-selection in this match. "Experience does make a difference to the fortunes of a side. The absence of experienced players was felt in this match," he observed.
Pandit said his team’s inability to drive home the advantage when they were 210 for 3 on day one cost his side dearly. "We should have pressed home the advantage and got a score in excess of 350. That would have allowed our bowlers some cushion to bowl at."
at December 29, 2007 No comments: 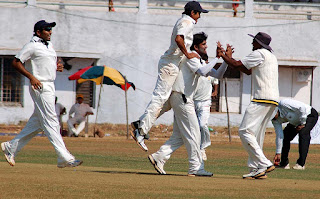 Suhrid Barua
suhridb@sakalherald.com
RATNAGIRI: Maharashtra were up against the wall going into the fourth and final day of the Ranji Trophy Super League tie against Karnataka at the Chatrapati Shivaji Stadium here, and a lot rested on the shoulders of skipper Venugopal Rao and opener Harshad Khadiwale to pull something out of the ordinary in order to force a draw.
Well it didn’t happen eventually as the hosts were bowled out for a paltry 140, handing Karnataka victory by an innings and 129 runs.
With his tails up after the bodacious hat trick on day four, Vinay Kumar was in ominous form. Bowling wicket-to-wicket, he moved the ball both ways and stifled the scoring opportunities of the home side.
He produced a gem of a delivery that climbed on Khadiwale with the latter fending it to Joshi who took a facile catch at slip. Yogesh Takawale paired up with skipper Venugopal Rao and took the attack to the opposition with some sizzling stroke-play in their 68-run fifth wicket stand. Takawale was in a belligerent mood, clunking Aiyappa through the cover region thrice in one over before sending one from Sunil Joshi crashing into the sightscreen for the maximum.
But Joshi, who enjoyed bowling on the fourth day track, which had a bit of bite in it, exacted sweet revenge on Takawale.
The batsman stepped out to the bowler and when he realised he was beaten in flight, played a defensive prod only to pop up a catch to Pawan at forward short-leg. Dhruv Mohan’s ugly swing of the bat saw him fall to Joshi for a duck.
Wicketkeeper Sunil Jadhav capped off a forgettable debut, departing for 4 to Joshi after the ball struck the front pad and umpire raising index finger.
Skipper Venugopal Rao was at his strokeful best and soon reached his fifty even as wickets tumbled at the other end. He greeted Vinay Kumar’s return to the attack for his second spell with a vintage flick shot to the mid-wicket boundary. But Vinay hammered the final nail in the coffin, dislodging the State skipper when he essayed an on-drive and was pouched by Raghu inside the 30-yard circle for 56.
It was Vinay’s fifth scalp and the win became a mere formality when he got rid of Aditya Dole to finish with career-best returns of 6-38 and a dream match-haul of 10-104. His previous best of 5-22 also came against Maharashtra in 2005.
With defeat looming large, State took lunch at 140 for 9 with tail-enders Wahid Sayyed and Samad Fallah at the crease. It just took one ball after lunch to bring up victory celebrations for Karnataka. Sayyed facing up Joshi, attempted a wild heave and holed out to Chipli at mid-on to hasten the doom of Maharashtra.
Delhi through
Delhi and Uttar Pradesh finished their league engagements with outright wins over Tamil Nadu and Hyderabad respectively to top their groups. Saurashtra and Baroda duly played out draws in their final games to end up second in their groups. The top two teams in each group ended tied at the same number of points, and were separated on the basis of outright wins and better quotient. UP had won one more match than Baorda, while Delhi had a better quotient than Saurashtra. In the semi-finals, UP will face Saurahstra in Vadodara while Delhi will take on Baroda in Indore.
at December 29, 2007 No comments:


RATNAGIRI: Winning matches is all about creating opportunities and grabbing them. Maharashtra team would have every reason to believe that they had their opportunities to land the knockout punch at Karnataka at least on two occasions.
First, when the State side were cruising along in their first essay at 210 for 3 before a dramatic collapse saw them fold up for 276. Second, when they had pushed Karnataka into troubled waters at 212 for 5 with 64 runs still required to overhaul State’s first innings score and five wickets remaining.
Clearly, State could have turned the tables on their opponents then. But it is a different matter altogether that Maharashtra failed to make the most of them and by the end of the penultimate day’s play, were fighting to avoid defeat in their Ranji Trophy Super League match at the Chatrapti Shivaji Stadium here on Thursday.
Riding on two stroke-filled tons by skipper Yere Goud and Bharat Chipli, followed by a sensational hat trick by seamer R Vinay Kumar, Karnataka now hold the aces.
The visitors piled on a mammoth score of 545 for 9 declared and buoyed by the 269-run first innings lead, their bowlers bowled with lot of fire and reduced hosts to 18 for 3 in their second dig at stumps. The hosts still trail by 251 runs.
Resuming at 239 for 5, Thilak Naidu and Yere Goud steered their side past Maharashtra’s score of 276. Once they did that, they treated the State bowlers with disdain. Goud played an innings blended with aggression and stout defense. He received solid support from another seasoned player, Thilak Naidu as they stroked the hapless Maharastra attack to all parts of the ground.
They stitched 120-runs for the sixth wicket before Naidu returned to the pavilion. His dismissal was the only breakthrough for State in the pre-lunch session.
Naidu was lulled into indiscretion by Venugopal Rao as the latter was pouched by the State skipper off his own bowling for a well-made 58.
At 332 for 6, Karnataka were in the comfort zone. Goud joined forces with Chipli and the pair continued to compound the woes of Maharashtra with a 135-run seventh wicket partnership that left State bowlers frustrated.
Goud’s hundred came from 205 balls and was studded with 17 boundaries. Once he fell to Takawale, Chipli carried on the run-fest, milking the State bowlers at will. Sensing that he may just run out of partners after inching closer to his hundred, Chipli decided to throw caution to the wind and belted three sixes and downplayed the importance of nervous 90s as he literally raced through them.
Maharashtra openers -Harshad Khadiwale and Ankit Bawne had hardly got their eye in when Vinay Kumar wreaked havoc with a stirring hat trick. He castled Ankit when the latter offered no shot to a delivery that nipped back. Nightwatchman Ajinkya Joshi was yorked off the next ball before the seamer returned in his fifth over to complete the hat trick when he trapped Ameya Shrikhande lbw to infuse excitement towards the fag end of play.
at December 29, 2007 No comments:


Ratnagiri: Maharashtra coach Chandrakant Pandit would have wanted his bowlers to make early inroads on day two, if they seriously nourished ambitions of forcing an outright win and give themselves a chance of reaching Ranji Trophy semi-finals.
However, Pawan had his own ideas, as his century took Karnataka very close of gaining the first innings lead on Wednesday. The visitors ended day two at 239 for 5, just 38 runs short of taking the lead. In the morning, two seamers - Samad Fallah and Wahid Sayyed rightly responded to the call.
Bowling an incisive spell, the Fallah-Sayyed combine pitched the ball around the corridor of uncertainty and kept the Karnataka openers -Robin Uthappa and KB Pawan on a tight clamp. Uthappa threatened to regale the goodly crowd who were anticipating fireworks from him.
The Coorg-lad belted three crisp boundaries before he choose bravado over common sense. He played a nothing shot, poking at an innocuous delivery outside off stump with Takawale pulling off a blinder at first slip.
One-drop Devraj Patel also didn’t set the Mandvi beach on fire as he drove without any footwork and offered a regulation catch to Dhruv Mohan in the slips. At 38 for two, Maharastra bowlers must have been smacking their lips at the prospect of running through the Karnataka middle-order and gain handy first innings lead.
But opener Pawan, who was nervous early on - beaten outside off stump on numerous occasions, gradually grew in confidence. He found plenty of comfort in the company of C Raghu as the duo negotiated the State bowlers with oodles of grit and determination. Raghu was fluent of the two and executed some delectable wristy shots.
The free-flowing batting style of Raghu rubbed off on Pawan, who started to open up. They took their side to lunch at 103 for two and were un-separated in the post-lunch session as the State bowlers toiled without reward on a baking day.
The final session threw up exciting moments like day one. Left-arm spinner Ajinkya Joshi finally breached the 166-run third wicket stand between Pawan and Raghu when he enticed the latter to sweep, only to find Mohan at long-leg.
State skipper Venugopal decided to roll his arm over and got rid off Amit Verma for one. At the other end, Pawan didn’t allow the nervous 90s get the better of him as he first square-cut Dole to the point boundary to reach 98 before unleashing a crashing cover drive off the next ball to bring up a well-deserved hundred.
at December 29, 2007 No comments:


Ratnagiri: There were strong lessons to be learnt from the batting debacles against Delhi and Saurashtra, but Maharashtra didn’t seem to learn anything as they came up with another toothless batting display and were shut out for 276 on day one of the Ranji Trophy Super League Group ‘A’ match against Karnataka at the Chatrapati Shivaji Stadium on Tuesday.
The State top-order dug in gamely and made steady progress with the opening duo of debutant Ankit Bawne (in fact, four players made their Ranji debut) and Harshad Khadiwale, raising 42 for the first wicket.
15-year-old Ankit never looked overawed by the big stage and showed that he has the material to go up the ladder. He essayed some elegant drives against the Karnataka new ball operators -Vinay Kumar and NC Aiyappa, who kept a probing line early on, beating the outside edge of both openers regularly but without any luck.
Ankit promised more before Vinay Kumar produced a ripper to induce a thick outside edge from the opener, who offered a sitter to gloveman Naidu. His opening partner Harshad Khadiwale took over and imposed himself on the Karnataka bowlers with grit and discipline. Harshad, a member of India U-19 squad, exuded maturity of a seasoned campaigner as he drove, flicked and cut with aplomb. He opened up in the post-lunch session, dealing in boundaries and arrived at his half-century square-cutting veteran left-arm tweaker Sunil Joshi to the point boundary.
at December 29, 2007 No comments: